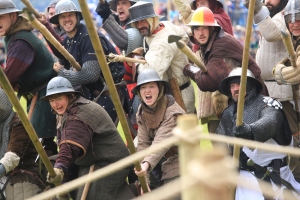 Bannockburn 2014 – but our everyday life isn’t a fight, so why being that aggressive? ©Jansen/Pakura

People asked me why I’ve stopped frequently writing and commenting on Scottish affairs. The honest answer is: Because I don’t have any interest in fighting. And that’s also the reason why I didn’t travel to Scotland for quite some months now. The mood changed after indyref past year, and without meaning that judgmental, I personally think: not for the best. It’s not my exclusive perception; I’ve heard many stories about close friends and even relatives or couples whose rivers divided in ugly ways due to incompatible views, mostly of the political kind. And while just one year ago the general opinion seemed to be “Scotland is open to everyone, and everybody who’s interested in our country is welcome, also welcome to express their opinion”, today these are the kind of comments I get: “if you were here, you would understand”, “it’s not your country, so take care of your own business”, “don’t lecture to me, I know the truth”.

As a private person, I’m hurt by that. It puts my perception of Scotland and what it stands for into question. As a professional, I see a huge issue with communication within Scotland, but it’s impossible to help if the help isn’t required. These comments I’ve mentioned above are said by both sides, people who are (still) for independence and people who are (still) for the union. There are two astonishing things about that: One, why the heck is the indy-question still so much in the limelight for all that the multi-national Scottish nation is divided? Two, how can it be that they both become kinda aggressive towards the same (in that case: my) arguments?

The answer to the second question is much easier, so let’s check that out first. My position in public is shaped by my self-conception of being a journalist and seeing things as non-biased and questioning as possible for a subjective individual. So I don’t generally come in on one side or another, but I always try to understand and question the arguments of both sides. Without judging, I conclude that both sides do have arguments which are logical and right, and other arguments which are crap and pathetic manipulation. So my conclusion would be, and that’s what I stand for in this context, that both sides should start to cooperate, put all the good things they have and know and want onto one big table, throw all the prejudices and sensitivities away in order to develop things in a constructive way.

But does that happen? No. Because things became emotional, personal even, and the fronts are hardened. I deliberately say “fronts”, because it feels a bit like war. It’s a being against each other, a proving that the others are wrong. By blocking them, by ignoring them, by accusing them, by insulting them, by – on the other hand – glorifying persons and opinions that back the “good” side (question of perspective, or course), often uncritically. Arguments seem to be overrated, solutions as well, it’s a fight. I dislike fights, so I keep out. I’m perceived to being a kind of “traitor” from both sides, because I don’t really agree with anyone but put into question what is claimed. And being an outsider on top, that’s a kind of high treason. I’m no ally, so I must be an enemy: That seems to be the sad way of thinking in Scotland these days. The same Scotland that demands a more objective, non-biased press, by the way…

But why the division? The indyref question is answered democratically, so where’s the point? Speaking as a communication scientist, I’d say: The point is the lack of cross-disposition communication. I don’t believe that all people who stick to their dream of an independent Scotland do want a new referendum asap or do agree with everything the SNP does or wants. I don’t believe that all people who believe in the British union and its advantages are generally against giving Scotland more powers or autonomy. But they don’t listen to each other. For some people, it’s enough to ask them a simple question which suggests what they said might be wrong or not totally right, and they just say “fuck off” and stop the conversation. So eventually, it’s impossible to move on together, because it’s not about moving on any more, it’s about insisting on knowing the only truth, no matter whether or not it’s right. The only thing I could do or suggest, is: talking. Talk and listen, even to people you don’t agree with. And don’t contradict on principle, but just accept the opinion.

An old neighbour of my mother recently told me joke. I somehow feel like bowing out with this joke. It tells something about different ways of perception and reference points, and maybe it also shows why listening and taking the other one seriously is so important:

A boy tells his father that he has to explain political terms at school, but doesn’t know how. It’s about capitalism, government and so on. The father has a look at the terms and starts to explain. “I generate money and bring it home, so I’m the capitalism. Your mother manages and spends it, so she’s the government. Some of it gets paid to our housemaid who is employed by us, so she’s the working class. We all do this in order to allow you a good life, because you’re the people. And your little sister, who is the future, makes it important to run a healthy economy and save money and resources for later. Did you understand that?”

The boy shakes his head and answers he may need to rethink it. At night, he wakes up, because his sister has pooped into her diaper, and it stinks terribly. So he thinks the adults should solve this problem, gets up and goes to his mother, but no matter how often he calls her, she will not wake up. So he goes to his father. Whose bed is empty. When he looks into the maid’s room, his father is eagerly busy with her, moaning and sweating, so that both do not notice the boy even though he calls them repeatedly. He shrugs and gets back to bed. Next morning, the father meets his son in the bathroom and asks if he rethought and understood those political terms. “Yes”, says the son, “now I understand very well, dad. The capitalism exploits the working class, while the government sleeps. The people and their will to solve a problem are ignored completely as if they weren’t there, and the future lies in shit.”